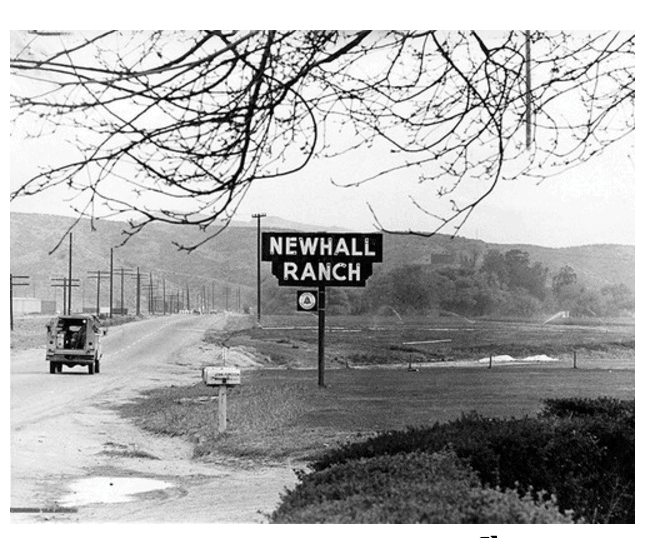 That’s me…blinking back tears of amazement as I read today’s Fivepoint press release, announcing the sale of the first 781 lots in Valencia’s Newhall Ranch, Mission Village project. I can’t believe it… I was beginning to believe that it might not happen in my lifetime.

Learning today that it IS really going to happen, I have the long-awaited pleasure of sitting at my keyboard to write my very first personal news/blog post for Ranch on the River. I am ready to compose a masterpiece as if the keys on my keyboard were made of ivory… I am tickled with nervous excitement, almost giddy to the point that my fingers won’t stay on the keys… ok…. here goes…

“What Matters Is Not the Idea a Man Holds, but the Depth at Which He Holds It”

Wow, that is so true! 30 years ago, I heard rumors about a new Newhall Land and Farm project. 20 years ago, I set my plans in motion and bought several Newhall Ranch domain names. 5 years ago, I started the Ranch on the River website. One year ago, I did a total makeover of my website. 10 months ago, Emile Haddad, Fivepoint’s Chairman and CEO, announced that they would not be calling it Newhall Ranch, but instead call it Valencia…. Wait… What??? Really????

Yep… it’s true. Newhall Ranch is now being called Valencia by the powers that be…. and with that one simple announcement, 30 years of planning blew up in my face in a heartbeat… ugghh… ok…well… take a deep breath, back to the drawing board… adjust and move forward just like I have with ever other “gotcha” along my life’s path.

So, adjust I did…kinda.   I will now be calling it “Valencia’s Newhall Ranch” for the time being until it is clearly defined on how they will actually go about sidelining such a historically significant name like Newhall Ranch.

The business side of me understands why going with the name Valencia works. It is a beautiful well-planned community with a great reputation. Why not just continue right? Ok… I get that. I also know they don’t own the domain Newhall Ranch like they do Valencia.  Someone obviously dropped the ball on that one… so they had to punt. Ok… I get that too.

My problem with the name change (other than the obvious.. and by the way… why wasn’t I consulted??? 😀 ) is Newhall Ranch was going to be something COMPLETELY new and different than Valencia. It was exciting. It was an amazing undertaking that was groundbreaking in the world of “green development”. There was a huge buzz around it. It was the first of it’s kind in the world. It was unique.

In addition to all that, the emotional side of me mourns the change tremendously because of its significance in our beautiful valley. I loved the name Newhall Ranch because, to me, it was dedicating, what I believe to be the last big parcels of land of the Newhall legacy to its founder Henry Mayo Newhall by calling it Newhall Ranch. The fact that now it doesn’t makes me very sad, as if that part of our history doesn’t matter, which just isn’t true… blink, blink, sniffle.

The Mystique is Gone

The Orange County Business Journal on Jan 13, 2020 announced,  “Irvine-based FivePoint Holdings LLC has sold its first homesites at Valencia, a master-planned community in Los Angeles County”.  I beg to differ with you… that happened back in 1967 with a little community call Old Orchard.

Announcing the first lot sales of Valencia, instead of Newhall Ranch, is not only confusing and incorrect, it is kind of… old news… but, ok.   Valencia is a nice place so it is just going to be bigger is all. However, I do hope they keep their facts straight.

To me, unfortunately, a little of the mystique is gone, but, nonetheless, it will be an amazing place to live… no doubt in my mind.

You know, I actually feel better now. I have wanted to scream my feelings to the world for a long time about the change. I just did… now I am over it. Valencia it is.  Onward and upward we go.

Planned in association with the WiFi alliance, Lennar (the second largest homebuilder in the US, bringing 25,000+ homes to market each year) is the first to participate in its WiFi Home Design program designed to bring the optimum technology-using experience to the home.

Its designs incorporate integrated home automation and voice control via Amazon Alexa as part of what the homebuilder labels its “Everything’s Included” approach to constructing new homes, but significantly the installer is noticeably absent from the picture in favor of household IoT products. Rumors instead suggest Amazon’s “Smart Home Services” (launched only a month ago) will be relied upon to deliver, install and provide support the systems.

“By engineering state-of-the-art Wi-Fi right into the design and construction of every new Lennar home the way we do plumbing and ventilation – and then bringing it to life with Amazon Alexa – families will be able to enjoy a connected lifestyle to the fullest.”

Lennar’s WiFi certified, Android and iOS-compatible home designs are powered by Ruckus Wireless to provide coverage in every room of the home, “with no dead spots” according to the company. It says this can support a seamless experience communicating with the Amazon’s Alexa smart assistant, whether controlling their lights, streaming TV or music, unlocking their front door or changing the temperature of their home.
Home automation is facilitated by Samsung SmartThings technology, with other technologies present in the designs including Lutron, Sonos, Honeywell, Kwikset, Baldwin and Ring. At the same time Lennar is making low voltage wiring obsolete, with plans to only implement Ethernet cabling to one or two WAP locations in the whole home. There is also no word on support for outdoor technology such as surveillance cameras or speakers.

“We live in a connected world, but most existing homes simply weren’t built for that world – leading to frustrating dead spots,” commented David Kaiserman, president of Lennar Ventures, adding that in 2017 homeowners expect WiFi to “just work.”

“By engineering state-of-the-art Wi-Fi right into the design and construction of every new Lennar home the way we do plumbing and ventilation – and then bringing it to life with Amazon Alexa – families will be able to enjoy a connected lifestyle to the fullest.”

The response to the announcement among the CI community has so far been mixed, with some applauding the homebuilder for sparking an industry-wide conversation on how homebuilders and home technologists can work better together, with others lamenting Lennar’s heavy focus on the wireless technologies of consumer-friendly brands over wired solutions.

Lennar’s WiFi Certified home designs from this month onward, with a nationwide rollout expected by the close of 2017. Homes from Lennar typically start at around the US $245k in some states, and as high as $350k in others.

Los Angeles County’s housing crisis is so severe that a even a massive development the size of a small city will offer little relief, experts say.

Developer Five Point Holdings won key approvals last week for its Newhall Ranch project, which would bring 21,500 residential units to Los Angeles County over 15 to 20 years. But development would have to continue at the same pace —  and occur at a higher density — in order to have any real impact on the county’s housing shortage, said Stuart Gabriel, director of UCLA Ziman School for Real Estate.

“Newhall Ranch will certainly be helpful, but not curative in any sense,” he said to KPCC.

Ten percent of housing at the mega-development, which sits in Santa Clarita Valley, will be priced below-market for low income families, according to KPCC.

The 12,000-acre project is expected to break ground next year, following a decades-long battle with environmental groups.

Newhall Ranch will start out as two villages with 5,500 homes and 2.5 million square feet of commercial space between them.

Environmentalists have been concerned about the greenhouse gases the project could generate and its impact on local wildlife. An attorney for the Center for Biological Diversity said the group might appeal the county’s approval.

Five Point, headed by Emile Haddad, is working to reduce the project’s carbon footprint to zero, according to KPCC. It’s planning to use solar panels on every home and set up electric charging stations.

Newhall Land Development Inc. won a victory Wednesday in its bid to begin construction of Newhall Ranch as an appellate court affirmed the environmental review and approval of Landmark Village, the first phase planned for construction.

The decision, however, has not stopped environmentalists who sued to halt the planned project on the West Side of the Santa Clarita Valley.

A three-justice panel of the California Second Appellate District unanimously supported a February 2013 ruling by the Los Angeles Superior Court that affirmed the development project’s Environmental Impact Report, and other land use permits,  as approved by the County of Los Angeles in late 2011. The court acted on a lawsuit brought against the County by Sierra Club, Center for Biological Diversity, SCOPE and other environmental groups.

The appellate court’s 44 page opinion concurs with the earlier ruling by the trial court and fully validates the EIR, finding that the County of Los Angeles –which was the lead government agency that conducted the environmental review–had acted appropriately and with substantial evidence to approve the detailed document and its related mitigation measures.

“The appellate decision fully supports the Superior Court ruling and validates the several years of environmental review undertaken by the County of Los Angeles regarding Landmark Village,” said Marlee Lauffer, Newhall Land spokeswoman. “We had great confidence in the diligence the County took to certify the EIR.”

“As an owner of a company that is building master planned communities in California, we value our partnership with the County of Los Angeles,” said Emile Haddad, President and CEO of Five Point Communities, the development manager for Newhall Land. “Today, the exhaustive review of the County was affirmed by the Appellate Court to have been completed properly. We are thankful for their efforts and look forward to implementing the plans for Landmark Village.”

Landmark Village is located south of Highway 126 and includes a mixed use office and retail center, an elementary school, 2 miles of river trails and about 1,400 homes. It is part of Newhall Ranch’s Specific Plan which has undergone over 15 years of environmental reviews by the County, state and federal agencies. At build out, Newhall Ranch related villages will bring over 80,000 permanent jobs to the region and over 47,000 development related jobs. The Plan also calls for over 10,000 acres open space, 60 miles of trails, several public schools and community infrastructure including a water reclamation plant, fire stations, library and sheriff station.

Entrada would add 1,150 multi-family dwelling units and 2,624,400 square feet of commercial use space to 457 acres of land in the Santa Clarita Valley located west of Interstate 5 and south of Highway 126.