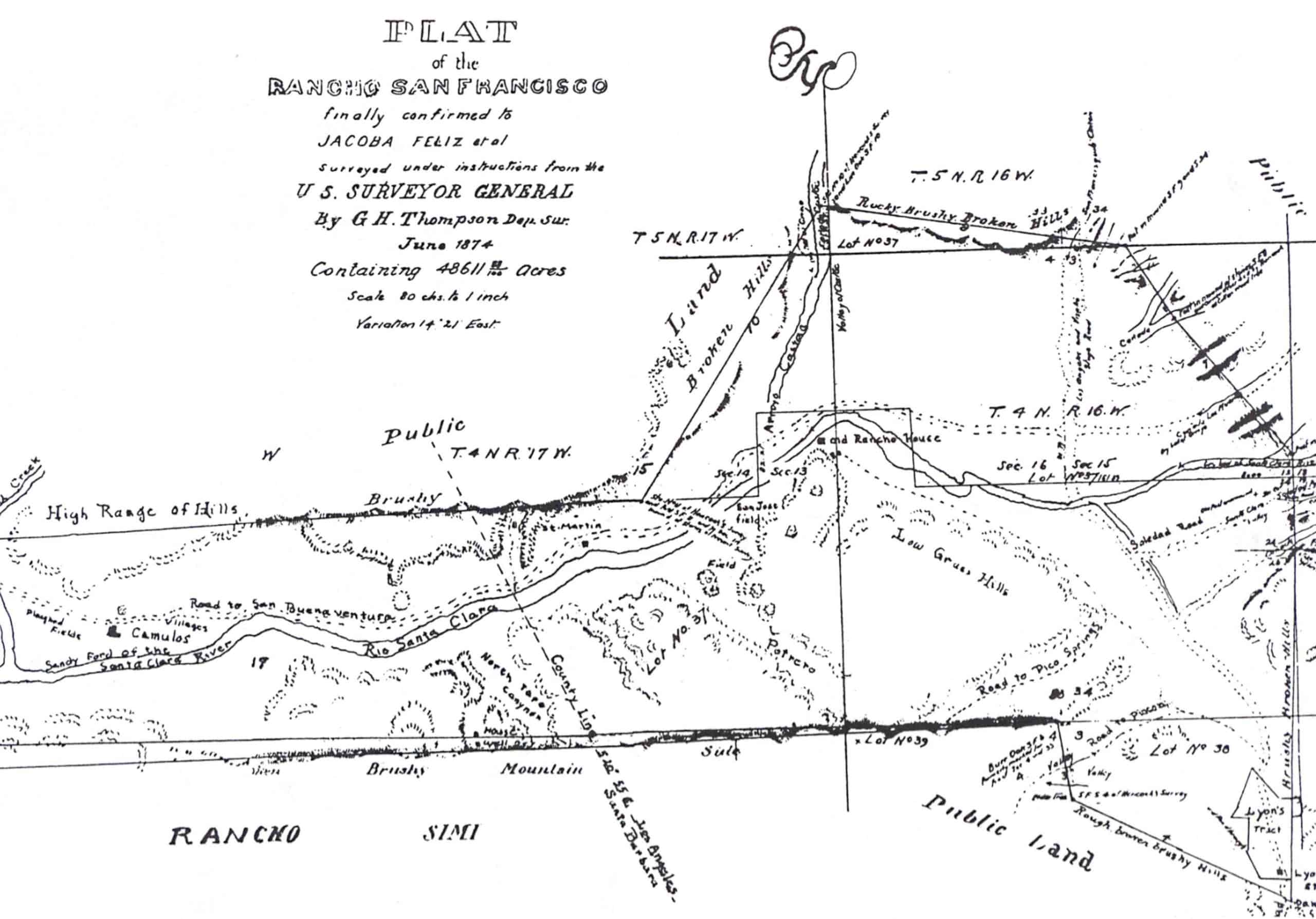 Rancho San Francisco was a Spanish land grant originally consisting of 48,912 acres. A good portion of that was purchased by Henry Mayo Newhall in 1875. Later it became the all-encompassing “Newhall Ranch.”

One hundred and twelve years later in 1987,  the majority of Newhall Ranch was incorporated into the city of Santa Clarita.  Henry was right, it did become a major metropolis. 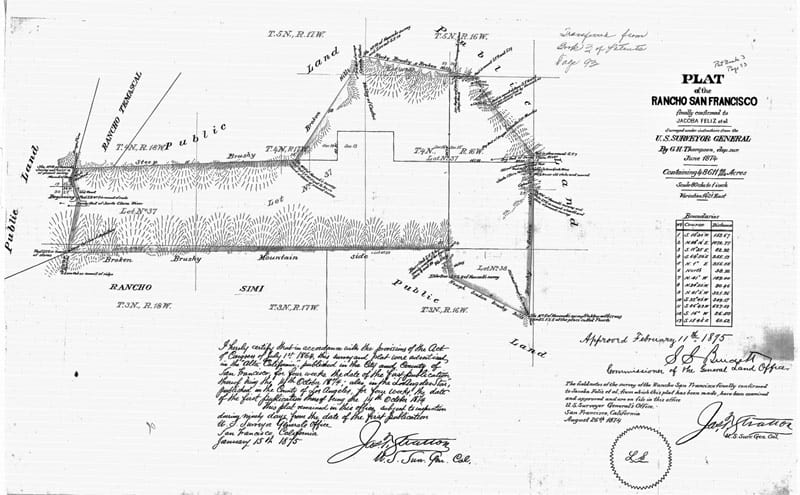 Boundaries of Rancho San Francisco on a old map 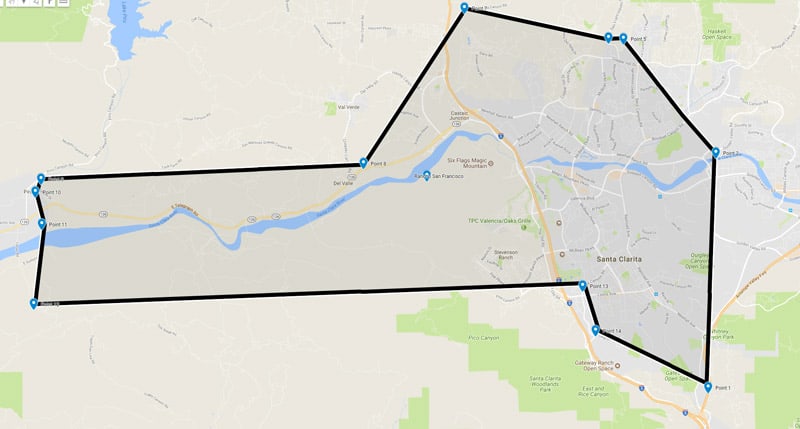 Boundaries of Rancho San Francisco on a Google map.

Henry, having made a vast fortune in the railroad business, turned his thoughts towards more real estate in the early 1870’s. He had already purchased several parcels of land and a multitude of vacant lots in San Francisco but decided to expand his “empire” to larger parcels of land.

He turned his focus to the Spanish Land Grants that often held several thousand acres. The drought of the 1870’s wiped out most of the cattle and the Ranchos were being foreclosed on by the dozens. 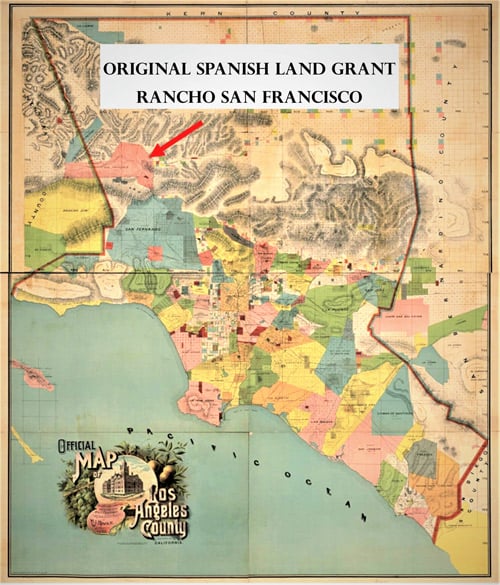 When he heard about Rancho San Francisco going up for Sheriff’s sale, he wanted it immediately.  He knew that since it was just on the outskirts of Los Angeles it would be unbelievably valuable someday.  He also knew that with the railroads making major headway in such a way that would end up with the tracks going right through the property, made him want it that much more.

Speaking of history, once again I would like to thank the Santa Clarita Historical Society for supplying pictures and access to the plethora of information about the Santa Clarita Valley, without which, this history portion of the Newhall Ranch would not have been possible. 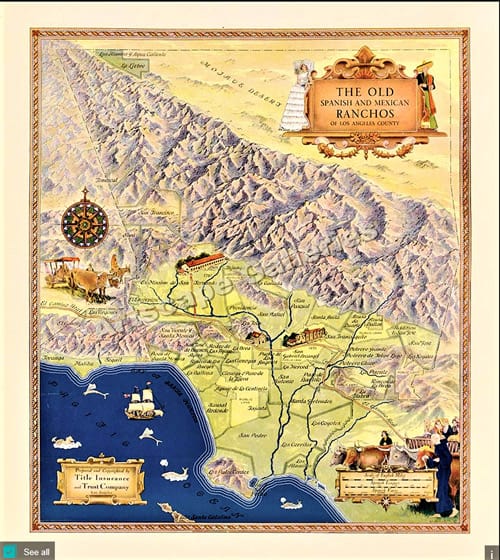 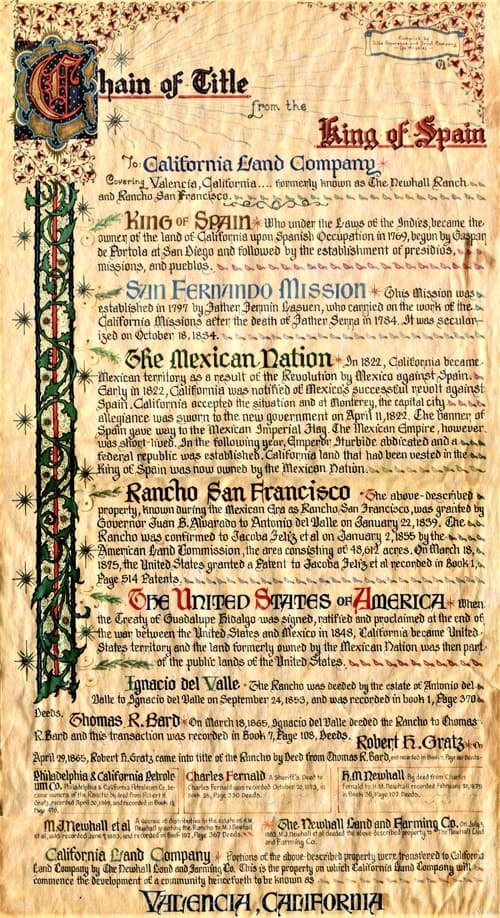 This was a promotional piece created by Newhall Land and Farm while marketing their new neighborhood called “Valencia” in the late 1960’s.

Build It and They Will Come

“When Newhall bought the ranch, the tracks were approaching its borders from two directions.”

“Rails from the north were being laid down Soledad Canyon and to the south, hundreds of Chinese laborers were digging the San Fernando tunnel, beyond which were the tracks to Los Angeles.

Newhall’s first move was to grant a right of way to the Southern Pacific Company.  A townsite, in the form of a square mile of trackside land, was deeded to the Western Improvement Company, a Southern Pacific subsidiary, that handled the land that the railroad exacted as a price for bringing transportation to the area.  The Western Improvement Company named the townsite “NEWHALL”, and thus it remained.” 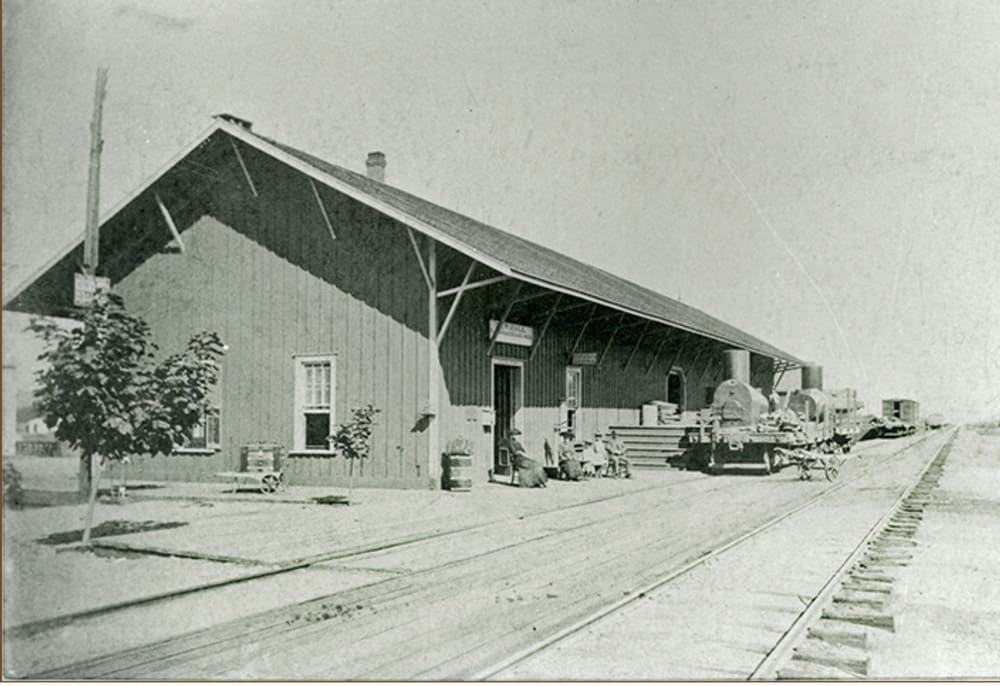 A little bit of trivia

The current Newhall Metrolink Train station happens to be on the exact same spot as the first train station above. 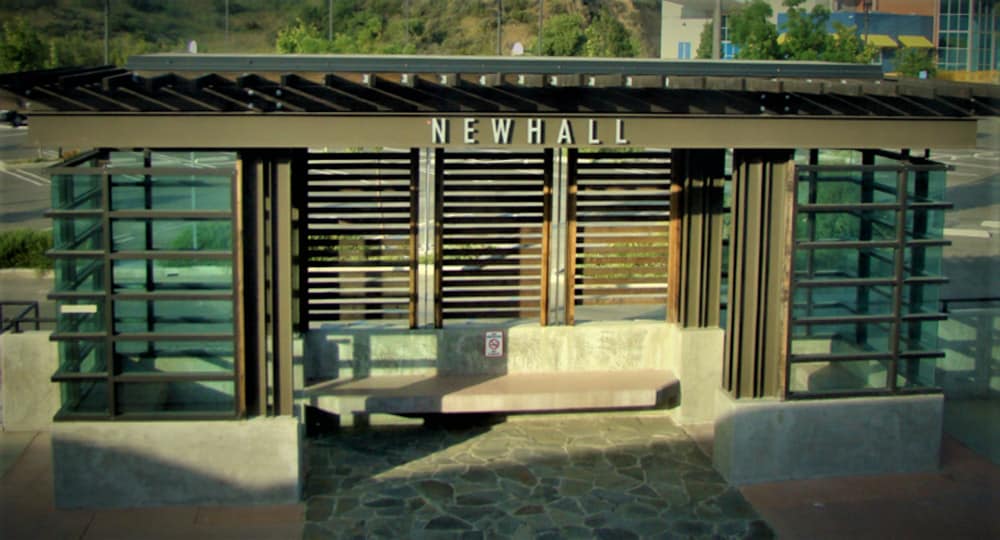 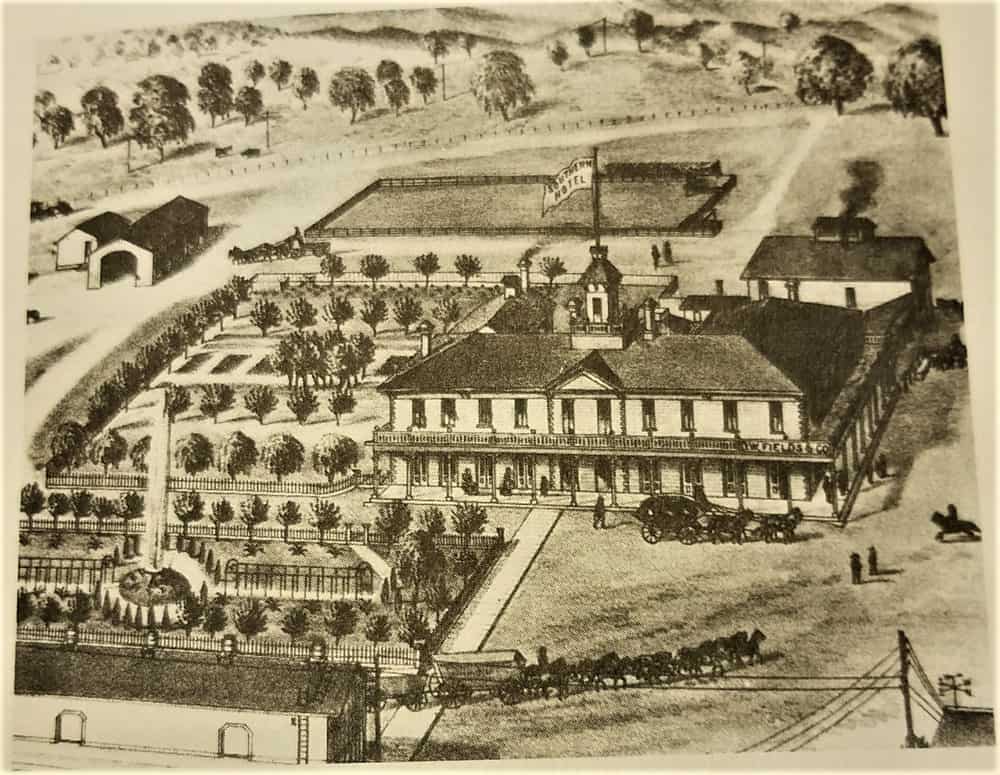 Drawing of the Southern Hotel, the park that surrounded it and the train depot across the tracks from the hotel. – A California Legend by Ruth Newhall

Henry incorporated a hotel company and proceeded to build a beautiful upscale hotel on the southwest corner of Railroad Avenue and Market Street. Conveniently, and not by accident I am sure, it was built catty-corner and across the street from the new train depot.

This venture would mark the beginning of his brand-new namesake town of “Newhall”.

A historian at the time described Newhall’s Southern Hotel as “the best in the State outside of San Francisco.”   The luxury hotel was built in 1878. Across the street from the hotel, Newhall laid out a town square, planted it with young trees.

It was the entertainment center of the cultured elite and was the place of lavish parties until it burned to the ground because of a faulty flu on the fireplace on October 23, 1888, never to be rebuilt. 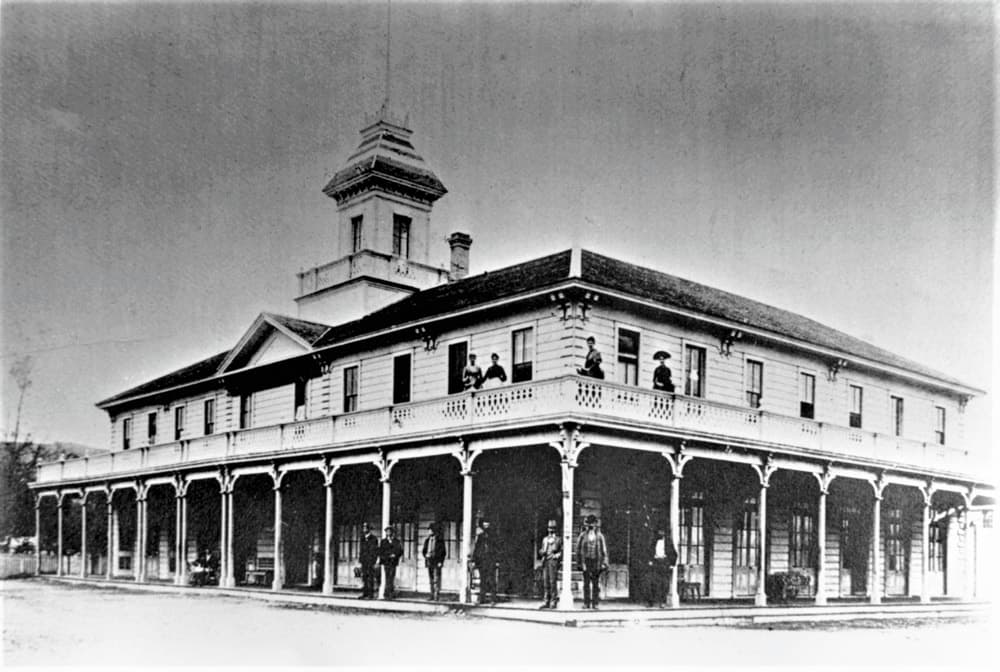 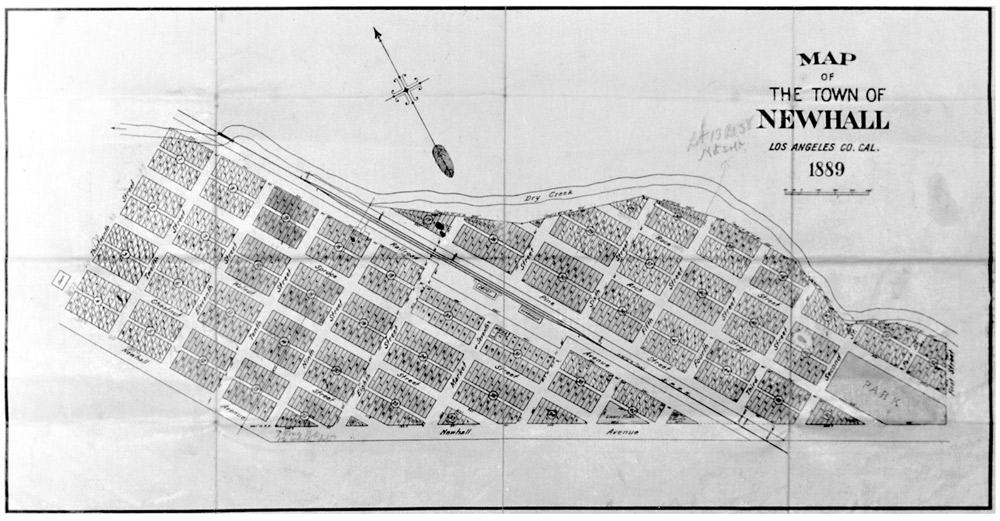 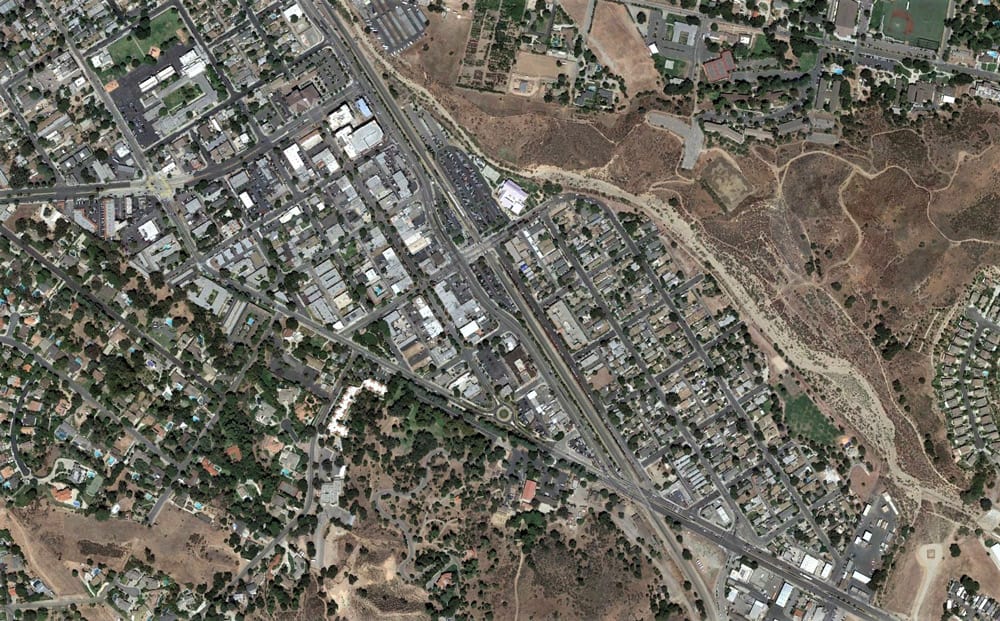 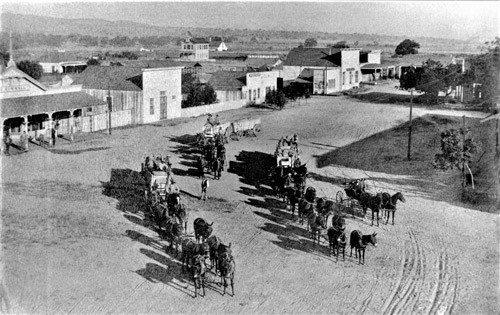 Henry’s vision was spot on!

Henry’s vision of his beloved Rancho San Francisco being a major southern metropolis is exactly what happened.  Even though Henry died in 1882 long before the town began to grow, his five sons along with their company Newhall Land and Farm did him proud! 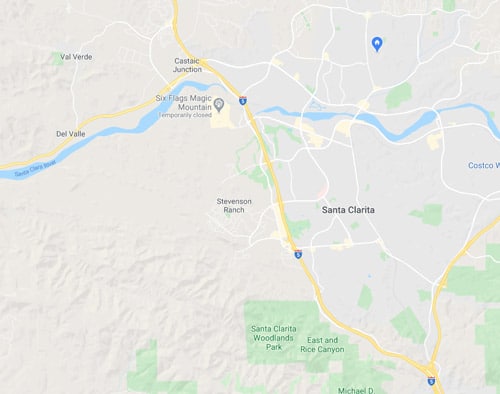 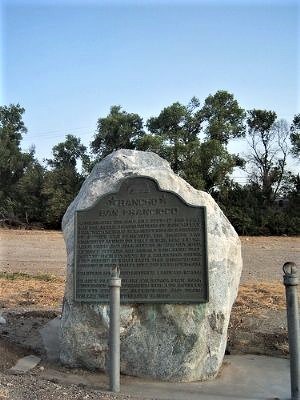 Inscription on the Marker

“Approximately one-half mile south of this point was the adobe headquarters of Rancho San Francisco, originally built about 1804 as a granary (i.e. warehouse/barn/storage facility) of Mission San Fernando.  The rancho was granted to Antonio del Valle in 1839.

William Lewis Manly and John Rogers obtained supplies and animals to rescue their comrades in a California-bound gold-seeking emigrant party that was stranded and starving in Death Valley, some 250 miles to the north east.”